Mexican tycoon Carlos Slim speaks at news conference at the Soumaya Museum in Mexico City in March 2011. (Ronaldo Schemidt/AFP/Getty Images)
“In the closing days of his campaign, Donald Trump vilified one of the world’s richest men — Mexican billionaire Carlos Slim — as part of a globalist cabal conspiring to extinguish his populist candidacy. At an Oct. 14 rally, Trump attacked Slim personally and accused Times journalists of being “corporate lobbyists for Carlos Slim.”
Yet over the weekend, Slim journeyed to Mar-a-Lago, Trump’s estate in Palm Beach, Fla., for what the president-elect described as “a lovely dinner with a wonderful man.”The peacemaking gesture — the culmination of weeks of back-channel negotiations that included a secret visit to Mexico City by a Trump envoy — signals a possible thawing between Trump and Mexico’s business and political elite, which he had used relentlessly as a foil throughout his campaign.The communications raised hopes in Mexico’s business community that Trump might reconsider his vow to tear up the North American Free Trade Agreement and be persuaded to adopt less hard-line immigration and economic policies, which were cornerstones of his campaign. Slim’s visit to Mar-a-Lago came after Corey Lewandowski, a former Trump campaign manager who remains a confidant of the president-elect, quietly visited Mexico City on Dec. 9 to meet with Slim.Trump told friends at the time that he believed Slim — who once had a business relationship with a rival candidate, former Florida governor Jeb Bush — helped orchestrate the public backlash.“He believes Carlos Slim was behind a lot of his problems,” said one Trump friend, who spoke on the condition of anonymity to be candid. This person suggested that Trump sees a benefit to Saturday’s dinner: “He wants to neutralize him.”Larry Rubin, president of the American Society of Mexico and a key liaison between Republican officials in the United States and Mexican leaders, said Trump and his team are forging a better understanding of shared economic interests between the two countries. “What President-elect Trump wants to do in coming closer to the Mexican business community has an impact not only nationally but regionally with Latin America and opens the doors for good business relations overall,” said Rubin, who is one of several candidates to serve as Trump’s ambassador to Mexico. “The closer that the administration is to businesses and governments in Mexico and in the region, the better for the U.S. A group of CEOs from both countries met in Mexico City recently for a public policy summit chaired by Tom Donohue, president of the U.S. Chamber of Commerce; John Rice, vice chairman of General Electric; Juan Pablo Castañón, chairman of the Consejo Coordinador Empresarial, a Mexican private-sector business council; and Armando Garza, chairman of Alfa, a Mexican-based multinational conglomerate.Slim’s mark can be seen all across Mexico City, from the glittering Museo Soumaya, an hourglass-shaped building made of aluminum tiles and named after his late wife, to the Sanborns department stores that dot so many corners. His wealth amounts to a noticeable chunk of the country’s gross domestic product.”Donald Trump asks his supporters if they understand what he says after criticizing NAFTA. (The Washington Post)

“And then last year, he decides to sell those shares of the NYT or part of them to some US hedge fund investors” @saysDana

“Slim exercised the warrants in 2015 and has held on to most of the shares, benefiting from a 51 percent rally as the election of President Donald Trump drove demand for digital subscriptions from news-hungry readers. Sure he did, he was that smart.Before he was elected, Trump accused Slim of using his ownership stake in the Times to influence the paper’s coverage of him. The Times said Slim never affected coverage and a representative for the billionaire said Slim wasn’t interested in influencing the election. Uh huh, sure. Back in 2009, this was a really good story. This was interesting. In October, 2008, Chris Wood, a representative of SunTrust, an Atlanta bank that had loaned about eighty million dollars to the Times, approached Inbursa, a bank in Mexico City that belongs to Carlos Slim Helú.

June 1, 2009 Issue  Slim’s Time Who is Carlos Slim, and does he want the paper of record? New Yorker

By Lawrence Wright . “In modern history, no one has dominated a major economy as overwhelmingly as Carlos Slim does that of Mexico—a country of a hundred and ten million citizens, in which the per-capita income is little more than ten thousand dollars.” 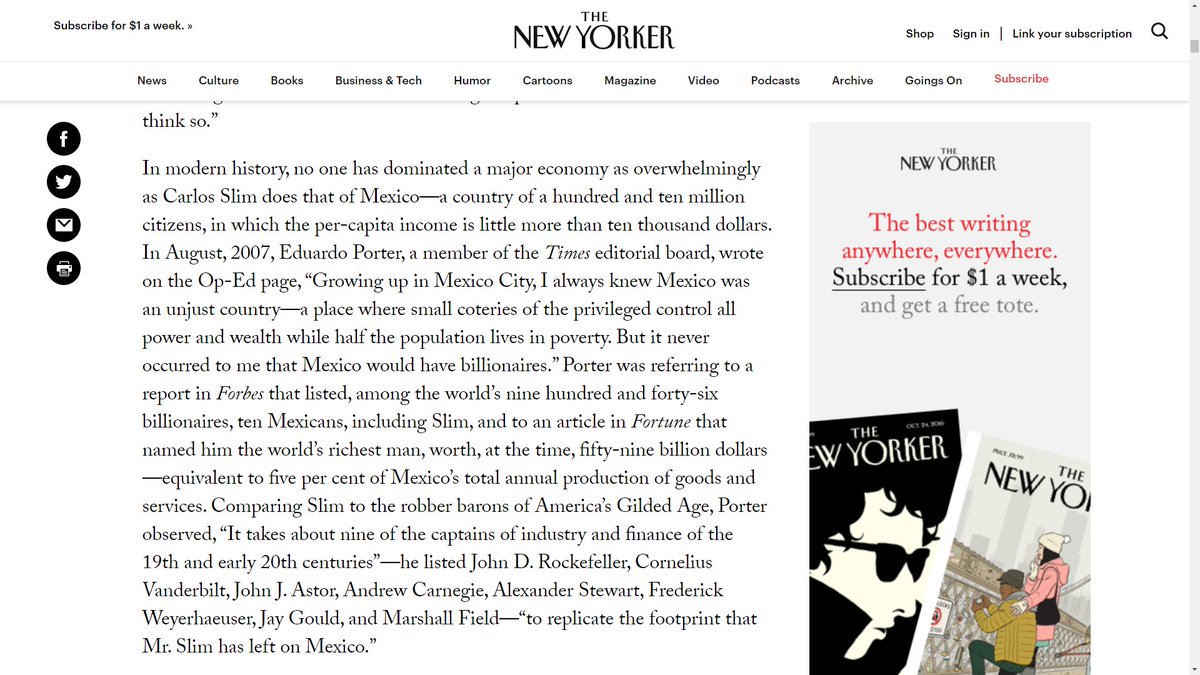 “He was said, back in 2009, to have owned so many things that Mexican’s purchased that almost everything they bought belonged to Slim” 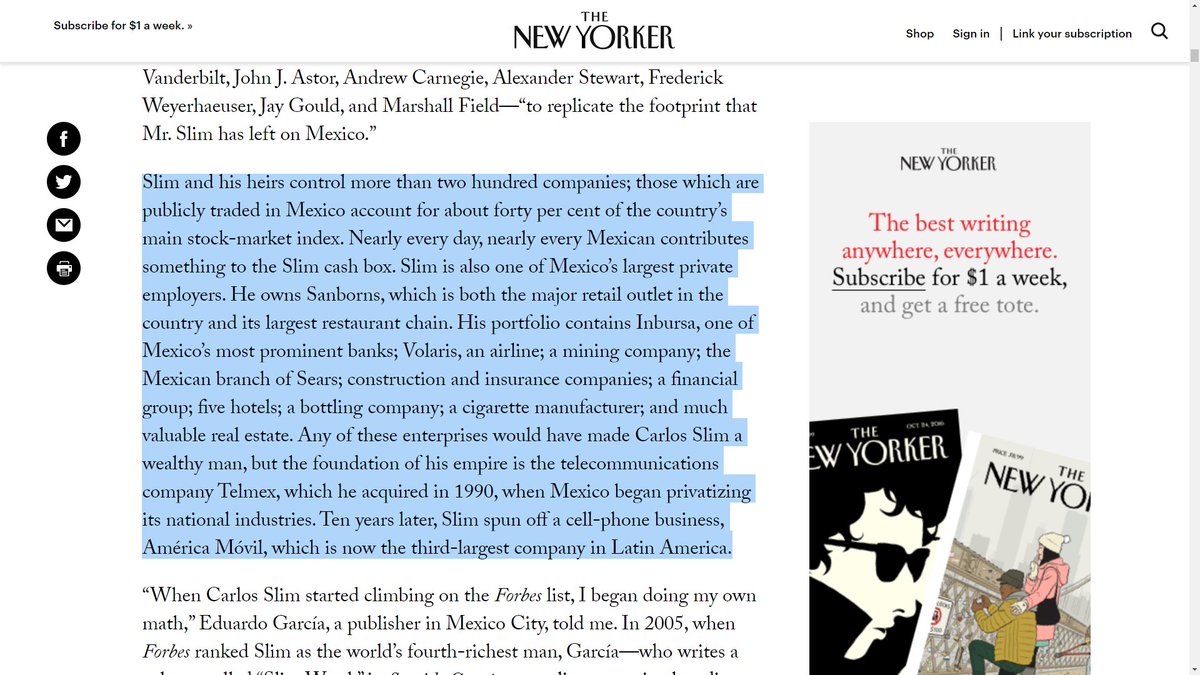 “But to many other Mexicans Slim represents what is wrong with the Mexican system. A prominent investment banker in Mexico City told me, “There are two views in the country about Slim. And, given his fortune, he is not a lavish spender. “He is the only Mexican among the top two hundred in wealth who doesn’t have a home in the U.S.,” a former Mexican government official told me. What? 200 Top Wealthiest people in Mexico owns homes in the U.S.? He loves baseball and art. But he’s not Mexican. He’s Lebanese Interesting, isn’t it?” 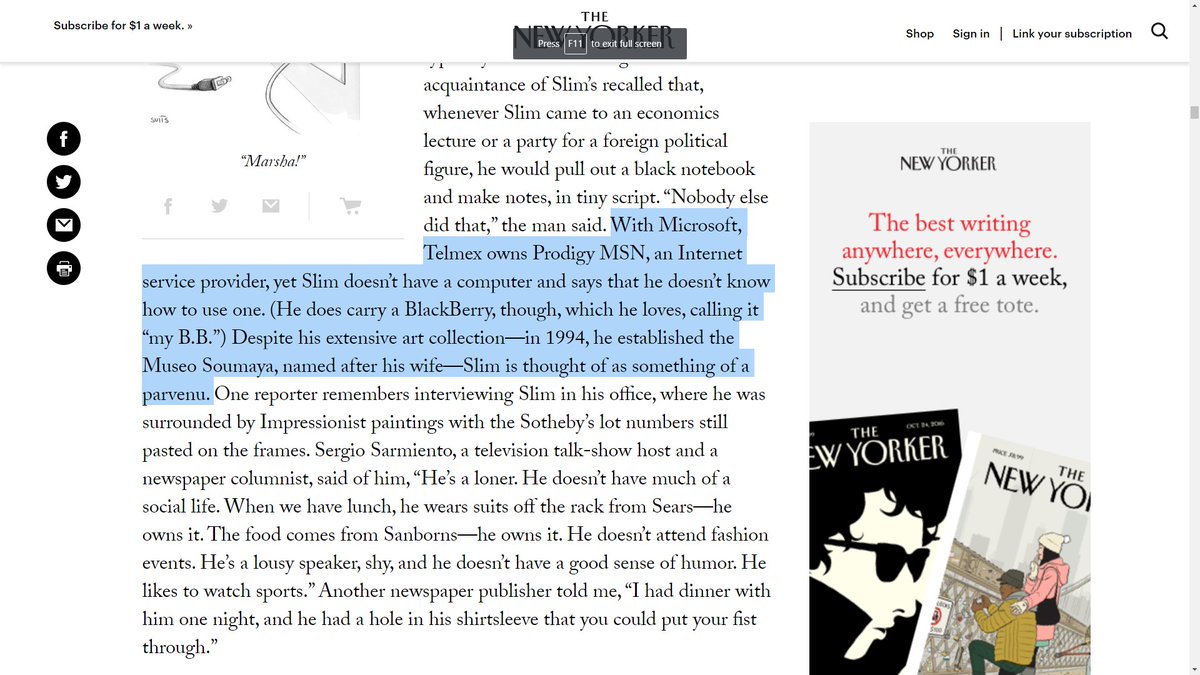 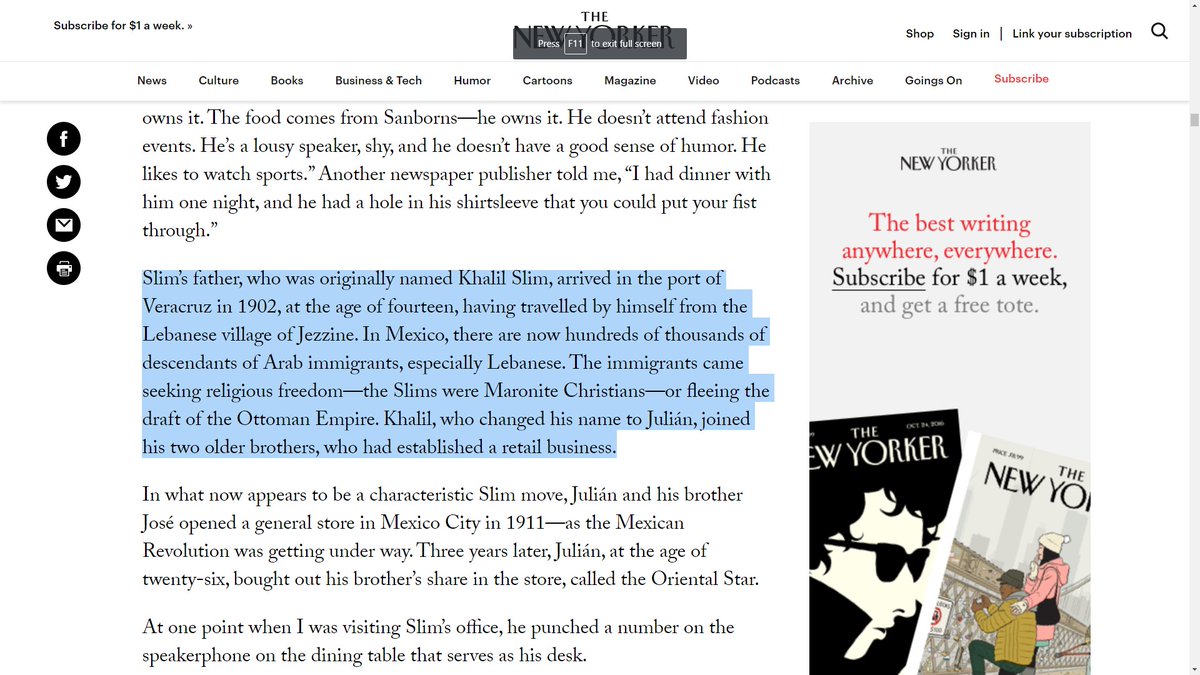 “So why want the times? as I post above, he saw an opportunity to make money on digital subscriptions that were boosted by Trump’s shenanigans.” 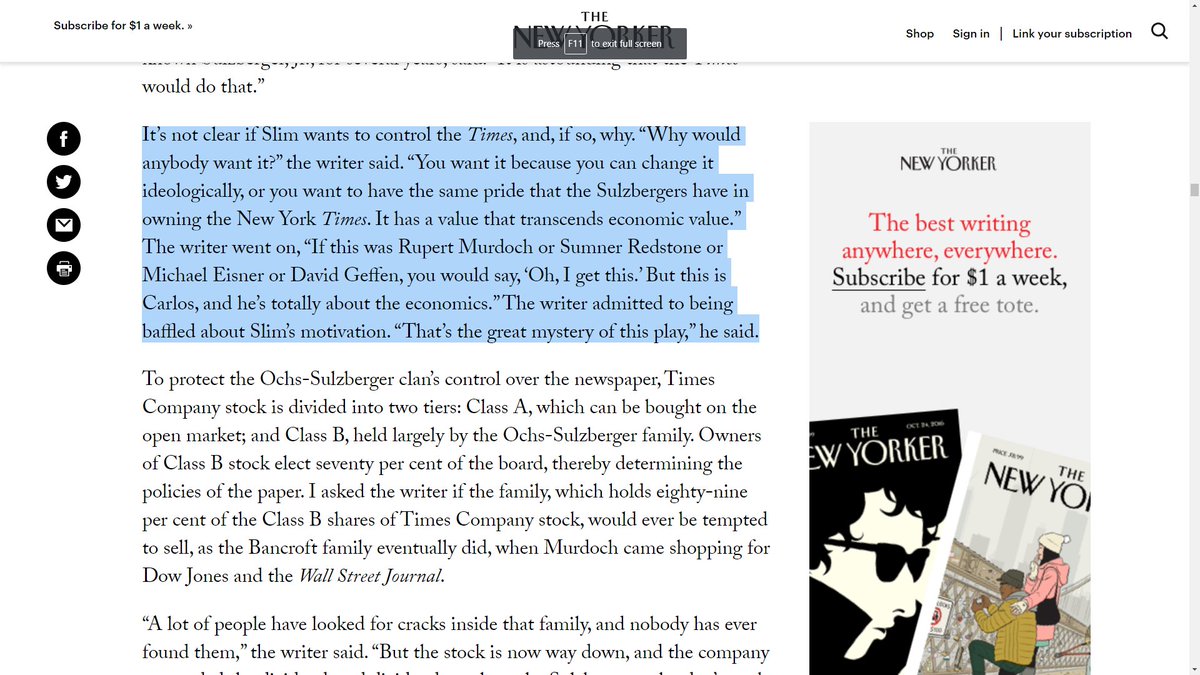 “In 2007, Hassan Elmasry, a Morgan Stanley fund manager based in London, who controlled ten million shares of Class A Times Company stock, pressured the management to eliminate the two-tier stock system, without success. The hedge fund Harbinger Capital Partners forced two candidates onto the board after acquiring nearly twenty per cent of the company’s stock, but that hasn’t got Harbinger any closer to running the paper. I can’t even go into this one, but I will in a separate thread. Who owns the Times? Lots of people.” 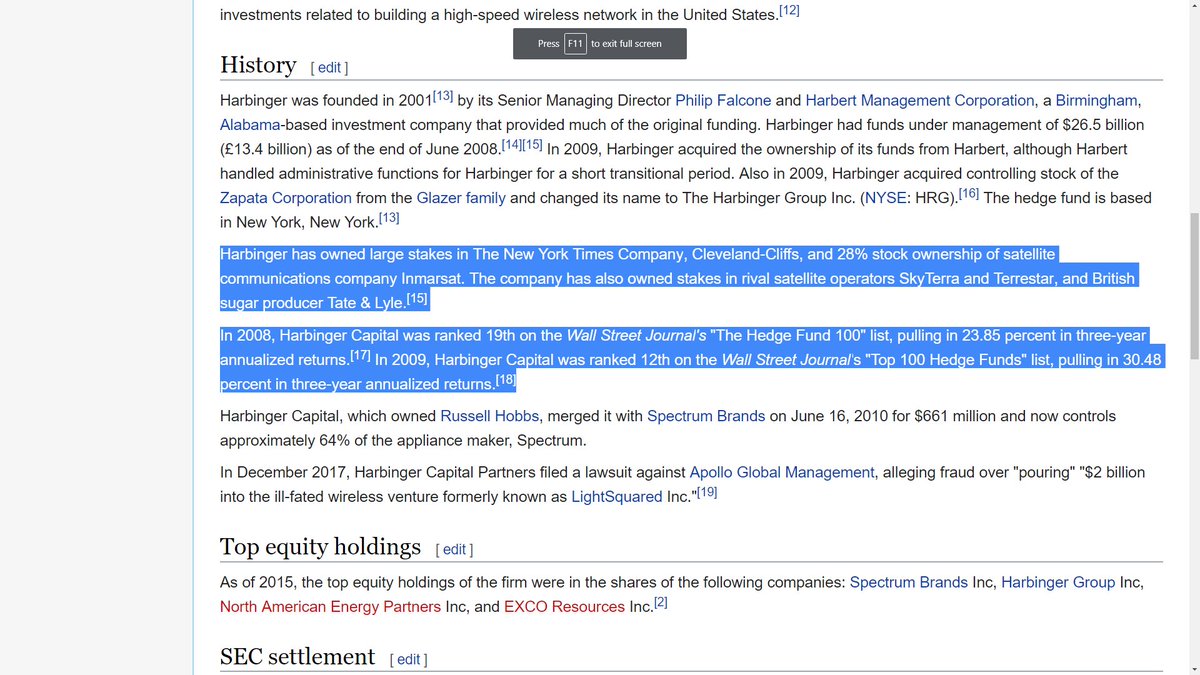 “HMMMMMM Why would David Geffen want to buy the times and take it private? Why would the Sulzbergers say no to that? Pride?” 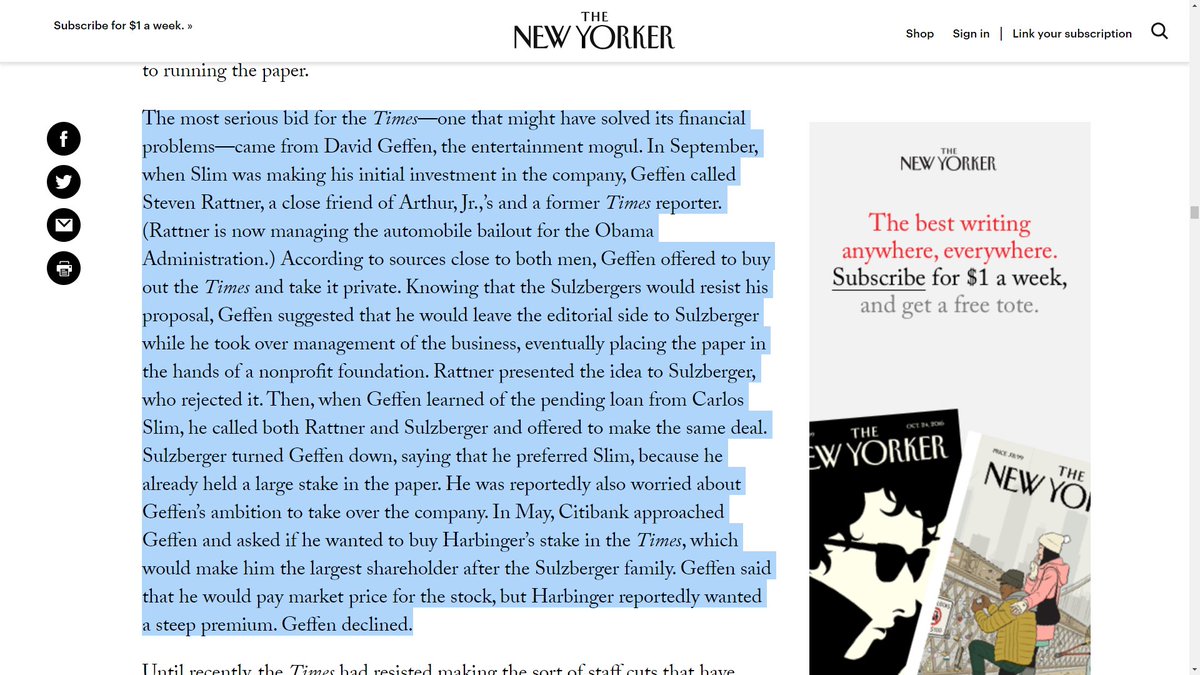 “In May, Citibank approached Geffen and asked if he wanted to buy Harbinger’s stake in the Times, which would make him the largest shareholder after the Sulzberger family. Geffen said that he would pay market price , but Harbinger wanted a steep premium. Geffen declined. So who owns the Times? Many folks. Why is the NYTimes not giving us good honest solid journalism? Too many hands in the money jar. AND About that dinner with Slim at Mar-A-Lago? Where you go for payoffs? Slim’s visit to Mar-a-Lago came after Corey Lewandowski, a former Trump campaign manager who remains a confidant of the president-elect, quietly visited Mexico City on Dec. 9 to meet with Slim. After the election, Slim connected with [Corey] Lewandowski — someone he saw as having Trump’s ear but not as a formal member of his staff — and arranged for them to discuss trade, economic and other issues, according to people with knowledge of the session. A television company controlled by Slim canceled a project it had been working on with Trump’s company, and Slim’s spokesman said Trump was “close-minded” and his comments “totally out of line.” Really? a project with Slim and Trump? A group of CEOs from both countries met in Mexico City recently for a public policy summit chaired by Tom Donohue, president of the U.S. Chamber of Commerce; John Rice, vice chairman of General Electric [including ALFA]; all met in to discuss Trump. @SaysDana“

“In a 2013 appearance CBS’s “Late Show With David Letterman,” Trump told the host that Slim was a “good guy” with “a lot of money.” When Letterman detailed the towering nature of Slim’s fortune, however, Trump smiled. “I don’t feel so good when you mention Carlos Slim,” he said,”but that’s okay.” Washington Post

By REUTERS and AP PUBLISHED: June 29, 2015 | UPDATED: June 30, 2015 “Fired: Slim’s was the third company to cut ties with Trump. His comments – that some Mexican immigrants bring drugs and crime to the country and are rapists – offended many, were denounced by Mexican-American groups and led NBC to abruptly drop the billionaire. Ora TV, a production company co-founded by Slim and TV personality Larry King and funded by America Movil, cancelled a program it was working on with some of Trump’s companies, Slim’s spokesman and son-in-law Arturo Elias said. Telecoms magnate Slim is the world’s second-richest man, with a net worth of around $71.1 billion, according to Forbes. Trump is at number 405 on the list, worth $4.1 billion. NBC said on Monday that it would no longer air the ‘Miss USA’ and ‘Miss Universe’ pageants due to his comments.  Spanish-language broadcaster Univision also said on Thursday it would not air the Miss USA pageant.

The next domino to fall in Trump’s empire might be his clothing line at retail mega-chain Macy’s. A MoveOn petition urging the retailer to dump Trump had gained over 700,000 signatures as of Tuesday morning.”

Slim repeatedly lauded Trump on Friday as “a great negotiator” while quoting liberally from his book Great Again: How to Fix Our Crippled America.

Speaking at the end of a week in which relations between the two countries have slumped to a new low, Slim downplayed the potential threat that the Trump administration represents for Mexico. “Trump is not the Terminator. He’s Negotiator,” Slim said. “I don’t see risks. I see opportunity.”

But he offered a subtle critique of the US president’s professed plan to “make America great again”, saying “returning to a glorious past of American industry that made them the world leader in the 20th century will not work”. The Guardian