“Glenn Simpson, the co-founder of investigative firm Fusion GPS, met with staff of the Senate Judiciary Committee as part of the committee’s investigation into Russian meddling and potential collusion with the Trump campaign in the 2016 presidential election.A committee spokesperson did not give Fox News any further information on the meeting with Simpson and Judiciary staff, though a source confirmed that Fusion GPS has given the Senate committee over 40,000 documents.

“Mr. Simpson told Congress the truth and cleared the record on many matters of interest to congressional investigators,” his attorney Josh Levy told Fox News.

Simpson’s company was behind the dossier that was compiled during last year’s campaign and which contained crude allegations against now-President Trump.

Committee Chairman Chuck Grassley, R-Iowa, and committee Ranking Member Sen. Dianne Feinstein, D-Calif., originally had issued a subpoena for Simpson’s testimony at a public hearing before the committee last month. But they withdrew it after Simpson reached arrangements to interview with the committee in private.”

HOW EX-SPY CHRISTOPHER STEELE COMPILED HIS EXPLOSIVE TRUMP-RUSSIA DOSSIER  The man behind the infamous dossier that raises the possibility that Donald Trump may be vulnerable to Kremlin blackmail is Russia expert Christopher Steele, formerly of M.I.6. Here’s the story of his investigation. APRIL 2017 Vanity Fair

“The committee’s hearing in July pertained to oversight of the Foreign Agent Registration Act (FARA). At the public session, CEO and founder of Hermitage Capital Bill Browder testified that Fusion GPS and Simpson worked “on behalf of the Russian government” in an effort to fight U.S. sanctions that had enraged Moscow’s elite.

Browder told lawmakers that Russian lawyer Natalia Veselnitskaya, who met with Donald Trump Jr. at Trump Tower in June 2016, also was responsible for hiring Simpson to “conduct a smear campaign against me and Sergei Magnitsky in advance of a congressional hearing on the Global Magnitsky Act.” The Magnitsky Act is a U.S. law that brings sanctions against Russian oligarchs suspected of money laundering.”

[77]“BuzzFeed sued over its publication of uncorroborated Trump dossier”  McClatchy DC May 2, 2017

Spy behind Trump dossier says info was never meant for public eyesCNN  May 3, 2017

After the hearing, Fusion GPS responded to Browder’s allegations — saying they had “complied with the law” and were “not required to register under FARA,” and “did not spread false information about William Browder or Sergei Magnitsky.”

“What is clear is that the president and his allies are desperately trying to smear Fusion GPS because it investigated Donald Trump’s ties to Russia,” Fusion GPS said in a statement to Fox News last month. “They have pulled out all the stops, including this false allegation about FARA.”

Paul Singer in June at an event for investors in New York. CreditMisha Friedman/Bloomberg

WASHINGTON — The Washington Free Beacon, a conservative website funded by a major Republican donor, first hired the research firm that months later produced for Democrats the salacious dossier describing ties between Donald J. Trump and the Russian government, the website said on Friday.The Free Beacon, funded in large part by the New York hedge fund billionaire Paul Singer, hired the firm, Fusion GPS, in 2015 to unearth damaging information about several Republican presidential candidates, including Mr. Trump. But The Free Beacon told the firm to stop doing research on Mr. Trump in May 2016, as Mr. Trump was clinching the Republican nomination.Hillary Clinton’s campaign and the Democratic National Committee had begun paying Fusion GPS in April for research that eventually became the basis for the dossier.The Free Beacon informed the House Intelligence Committee on Friday that it had retained the firm.NY Times

UK was given details of alleged contacts between Trump campaign and Moscow In December the UK government was given reports by former MI6 officer Christopher Steele on possible collusion between Trump camp and the Kremlin   The Guardian   April 28, 2017

BREAKING: Trump continues his LONG history of lying about the weekend Chris Steele says the Kremlin collected kompromat (blackmail) on him. pic.twitter.com/blYItDXtOP

BREAKING: Trump continues his LONG history of lying about the weekend Chris Steele says the Kremlin collected kompromat (blackmail) on him. 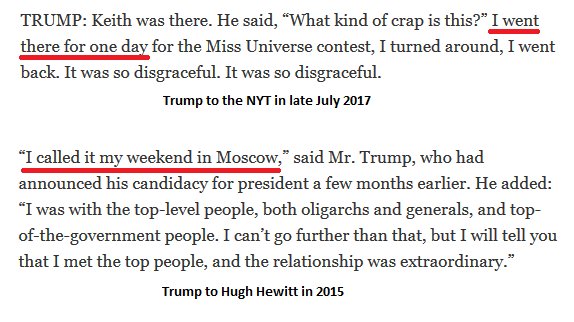 (2) Miss Hungary—BEFORE the dossier—said Trump sought an adulterous affair with her while he was being so “careful”: http://www.huffingtonpost.com/entry/allegations-by-former-miss-hungary-contradict-trump_us_587e91b9e4b06a0baf649129 … 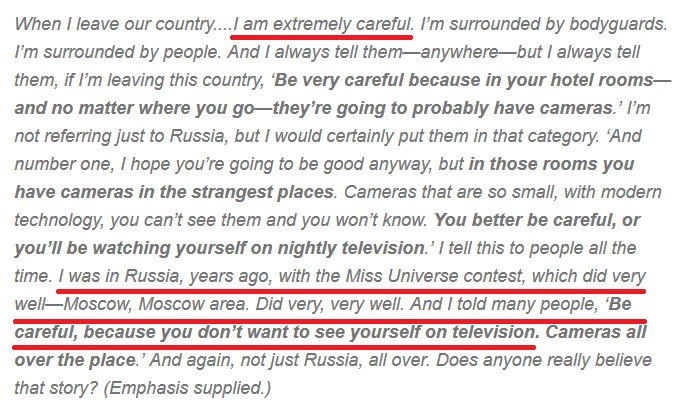 (3) There’s no question Trump’s lying about his actions in Moscow. The question is—why? Because the dossier is true?

(3) There’s no question Trump’s lying about his actions in Moscow. The question is—why? Because the dossier is true? https://t.co/dhBzBxGhdw 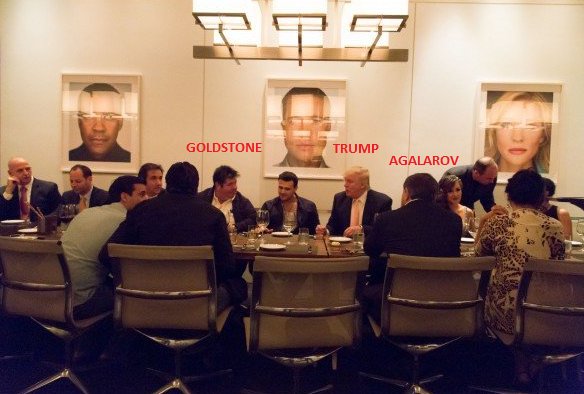 (5) Trump told the NYT Phil Ruffin—a fanatical Trumpist—was his *chief companion* in Moscow, *not* Goldstone or the Agalarovs. Another lie. 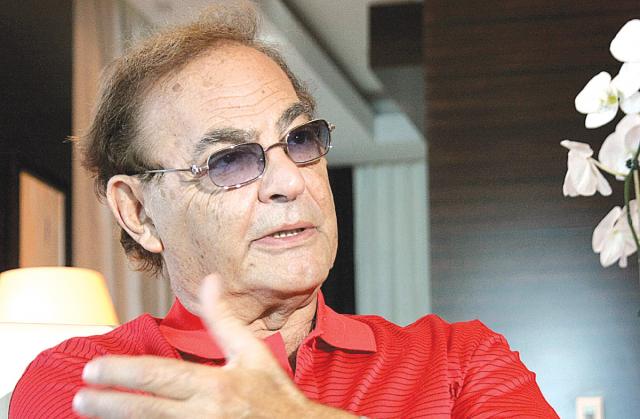 (6) Steele identifies Source E—Boris Ephsteyn—as being in Moscow with Trump and knowing what he did. Ephsteyn’s presence there is confirmed. 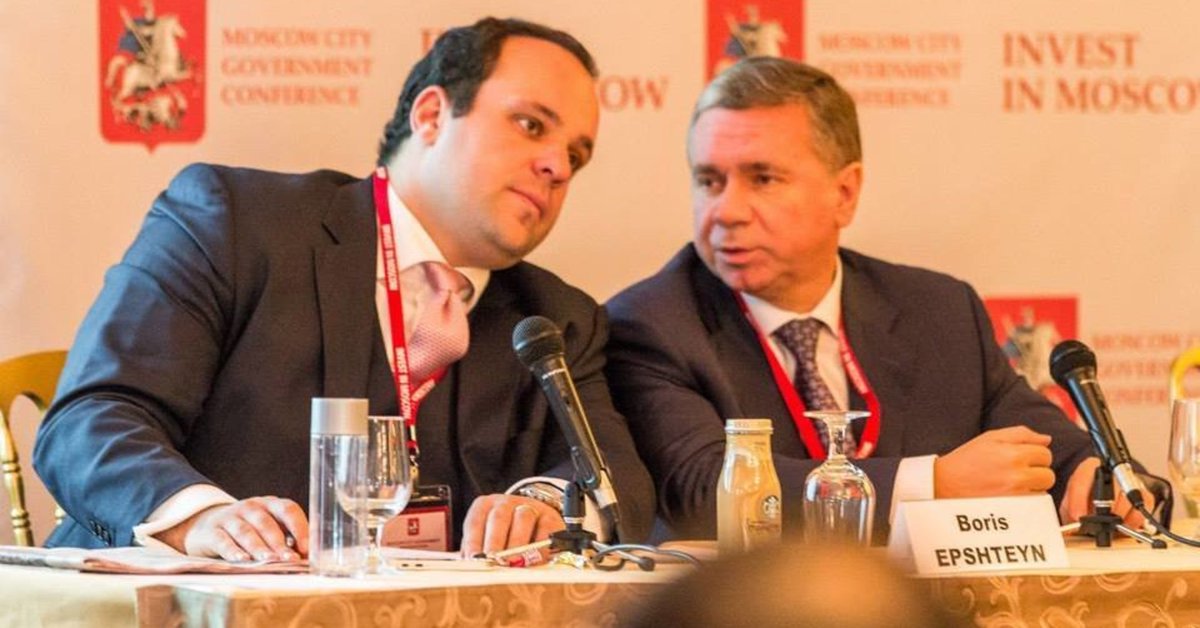 (7) Ephsteyn was unceremoniously—and without explanation—let go by the White House as serious Russia-related heat was coming down on Trump.

(8) The question isn’t “Why is Trump lying about that weekend?” He’s CLEARLY hiding something. I want to know, “Why isn’t the media asking?”

(9) The men associated with that weekend—Trump, Agalarov, Ephsteyn, Goldstone—have lied about or refused to discuss it. Let’s get the TRUTH.

(PS) I defended folks for years—I know when a crook’s hiding something. There’s something Trump DOESN’T WANT YOU TO KNOW about that weekend.