Wikipedia “Pompeo supports the surveillance programs of the National Security Agency, referring to the agency’s efforts as “good and important work”.[68]

Pompeo stated, “Congress should pass a law re-establishing collection of all metadata, and combining it with publicly available financial and lifestyle information into a comprehensive, searchable database. Legal and bureaucratic impediments to surveillance should be removed. That includes Presidential Policy Directive-28, which bestows privacy rights on foreigners and imposes burdensome requirements to justify data collection.”[69]

Mike and Susan Pompeo are affiliated with the Evangelical Presbyterian Church.[108][109] Pompeo serves as a local church deacon and teaches Sunday school.[107]

On July 21, 2015, Pompeo and Senator Tom Cotton alleged the existence of secret side agreements between Iran and the International Atomic Energy Agency(IAEA) on procedures for inspection and verification of Iran’s nuclear activities under the Joint Comprehensive Plan of Action. Obama administration officials acknowledged the existence of agreements between Iran and the IAEA governing the inspection of sensitive military sites but denied that they were “secret side deals”, calling them standard practice in crafting arms-control pacts and saying the administration had provided information about them to Congress.[81]

In November 2015, Pompeo visited Israel and said that “Prime Minister Netanyahu is a true partner of the American people” and that “Netanyahu’s efforts to prevent Iran from obtaining nuclear weapons are incredibly admirable and deeply appreciated”. He also said, “In the fight against terrorism, cooperation between Israel and the United States has never been more important”, and “[w]e must stand with our ally Israel and put a stop to terrorism. Ongoing attacks by the Palestinians serve only to distance the prospect of peace”.[82] He opposed Trump’s 2017 decision to move America’s embassy in Israel to Jerusalem.[83]

In December 2015, as a member of the United States House Committee on Energy and Commerce, he voted for two resolutions disapproving of the Clean Power Plan implemented by the United States Environmental Protection Agency during the Obama administration.

In February [11] 2016, Pompeo said Snowden “should be brought back from Russia and given due process, and I think the proper outcome would be that he would be given a death sentence”.[87] But he has spoken in favor of reforming the Federal Records Act, one of the laws under which Snowden was charged, saying, “I’m not sure there’s a whole lot of change that needs to happen to the Espionage Act. The Federal Records Act clearly needs updating to reflect the different ways information is communicated and stored. Given the move in technology and communication methods, I think it’s probably due for an update.”[88]

In February 2017, Pompeo traveled to Turkey and Saudi Arabia. He met with Turkish President Recep Tayyip Erdoğan to discuss policy on Syria and ISIL.[44]Pompeo honored the then-Crown Prince of Saudi Arabia Muhammad bin Nayef with the CIA’s “George Tenet” Medal.[45] It was the first reaffirmation of Saudi Arabia–United States relations since Trump took office in January 2017.[46]

In March 2017, Pompeo formally invoked executive privilege to prevent CIA officers, including Gina Haspel and James Cotsana, from being compelled to testify in the trial of Bruce Jessen and James Elmer Mitchell.[47]

[April 13, 2017:] In a 2017 speech addressing the Center for Strategic and International Studies, Pompeo called WikiLeaks “a non-state hostile intelligence service” and described founder Julian Assange as a narcissist, fraud, and coward.

In 2017, it was reported that Pompeo expressed desire for regime change in North Korea.[78] In July 2017, he said “It would be a great thing to denuclearize the peninsula, to get those weapons off of that, but the thing that is most dangerous about it is the character who holds the control over them today.”[79]

Pompeo worked to undermine the Joint Comprehensive Plan of Action nuclear deal with Iran that was negotiated by the Obama administration, saying, “I look forward to rolling back this disastrous deal with the world’s largest state sponsor of terrorism.”[80] He also said that a better option than negotiating with Iran would be to use “under 2,000 sorties to destroy the Iranian nuclear capacity. This is not an insurmountable task for the coalition forces.”

In August 2017, Pompeo took direct command of the Counterintelligence Mission Center, the department which helped to launch an investigation into possible links between Trump associates and Russian officials.[49] Former CIA directors[who?] expressed concern since Pompeo is known to be an ally of Trump.[50]

In September 2017, Pompeo sought authority for the CIA to make covert drone strikes without the Pentagon’s involvement, including inside Afghanistan.[51]

Pompeo usually personally delivered the President’s Daily Brief in the Oval Office.[53] At Trump’s request, Pompeo met with former NSA official William E. Binney to discuss his doubts of Russian interference in the 2016 United States elections.[54] At the suggestion of Tony Perkins, Pompeo planned to hire chaplains at the CIA to reduce officers’ high divorce rates.[54] 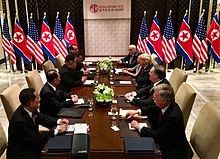 President Donald Trump announced on March 13, 2018, that he would nominate Pompeo to serve as Secretary of State, succeeding Rex Tillerson, who stepped down on March 31, 2018.

On April 23, the Senate Foreign Relations Committee voted 11-9 in favor of sending Pompeo’s nomination to the full Senate, with Senator Chris Coons voting “present” and Johnny Isakson, who was absent that day, voting “yes by proxy”.[55] In the interest of saving the Committee’s time, Coons decided to vote “present”, as the vote would have been tied if he had voted no on the nomination with Isakson absent, a situation that would have nullified his vote.[56] The Senate floor vote took place on April 26 and Pompeo was confirmed by the full Senate by a 57–42 vote, with several Democratic senators running for reelection in 2018 in states that Trump won in 2016, voting to confirm Pompeo.[57][58][59]

Supreme Court Justice Samuel Alito swore Pompeo in as the U.S. Secretary of State on April 26, 2018.[60].  During his confirmation hearing, Pompeo said that Russia “has reasserted itself aggressively, invading and occupying Ukraine, threatening Europe, and doing nearly nothing to aid in the destruction and defeat of ISIS”.[84] Pompeo accused Obama of inviting Russia into Syria.[49]

In July 2018, Pompeo raised the issue of Xinjiang re-education camps and human rights abuses against the Uyghur Muslim minority in China.[64]

In September 2018, Pompeo “backed continued U.S. military support for Saudi Arabia’s war in Yemen over the objections of staff members after being warned that a cutoff could jeopardize $2 billion in weapons sales to America’s Gulf allies, according to a classified memo and people familiar with the decision.”[89][90]

On 16 November 2018, a CIA assessment was liberally leaked to the media[65] that with “high confidence” Saudi Arabia‘s Crown Prince Mohammad bin Salman ordered the assassination of Washington Post columnist Jamal Khashoggi. Under mounting pressure from lawmakers who wanted action against Saudi Arabia, Pompeo disputed the CIA’s conclusion and declared there was no direct evidence linking the Crown Prince to the Khashoggi’s assassination.[66]

“In 1994, Pompeo received a Juris Doctor from Harvard Law School where he served as one of 78 editors of the Harvard Journal of Law & Public Policy,[18][19] and on the 81-member board of editors[20] of the Harvard Law Review.[2] After graduating, he worked as a lawyer for the law firm Williams & Connolly in Washington.[21]

In 1998, Pompeo moved to Wichita, Kansas, where he and three other West Point friends, Brian Bulatao, Ulrich Brechbuhl, and Michael Stradinger acquired three aircraft-part manufacturers there (Aero Machine, Precision Profiling, B&B Machine) and in St. Louis (Advance Tool & Die), renaming the entity Thayer Aerospace after West Point superintendent Sylvanus Thayer.[22][23][24] Venture funding for the private organization included a 2% investment from Koch Industries[25][26] as well as Dallas-based Cardinal Investment and Bain Capital (Brechbuhl worked for Bain at the time).[27][22] Brechbuhl and Stradinger left the company shortly after it was founded, but Pompeo and Bulatao continued until 2006. In 2017, when Pompeo became head of the CIA, he named Bulatao the agency’s chief operating officer.[23]

In 2006, he sold his interest in Thayer to Highland Capital Management. The announcement said clients of the firm included “Lockheed Martin, Gulfstream Aerospace, Cessna Aircraft, Boeing, Spirit AeroSystems, Raytheon Aircraft and others”.[28] It was renamed Nex-Tech Aerospace. Pompeo then became president of Sentry International, an oilfield equipment manufacturer that was also a partner of Koch Industries.[25]“

Pompeo has stated that life begins at conception and believes that abortions should be allowed only when necessary to save the life of the mother.[100] In 2011 he voted for the No Taxpayer Funding for Abortion Act, which would have banned federal health coverage that includes abortion. Also in 2011, he voted for a prohibition on funding the United Nations Population Fund.

He sponsored the Small Airplane Revitalization Act of 2013.[106]

On May 9, 2013, Pompeo introduced the Natural Gas Pipeline Permitting Reform Act.[95] The bill would have required the Federal Energy Regulatory Commission to approve or reject any proposal for a natural gas pipeline within 12 months.[96] The bill passed the House of Representatives along party lines but was not voted on in the Senate.[97]

[May 26, 2013] Pompeo opposes closing Guantanamo Bay detention camp.[75] After a 2013 visit to the prison, he said, of the prisoners who were on hunger strike, “It looked to me like a lot of them had put on weight.”[76] He criticized the Obama administration’s decision to end secret prisons and its requirement that all interrogators adhere to anti-torture laws.[77]

[June 12, 2013]: In a 2013 speech on the House floor, Pompeo said Muslim leaders who fail to denounce acts of terrorism done in the name of Islam are “potentially complicit” in the attacks.[70] The Council on American–Islamic Relations called on him to revise his remarks, calling them “false and irresponsible”.[71]

[June 25, 2013]: Speaking about climate change in 2013, Pompeo said: “There are scientists who think lots of different things about climate change. There’s some who think we’re warming, there’s some who think we’re cooling, there’s some who think that the last 16 years have shown a pretty stable climate environment.”[91] He has said, “Federal policy should be about the American family, not worshipping a radical environmental agenda.” He has called the Obama administration’s environment and climate change plans “damaging” and “radical”. He opposes the regulation of greenhouse gas emissions by the United States and supports eliminating the United States federal register of greenhouse gas emissions.[92].    Pompeo signed the No Climate Tax pledge of Americans for Prosperity.[93].   He has called for the permanent elimination of wind power production tax credits, calling them an “enormous government handout”.[94]

Pompeo supported the United States federal government shutdown of 2013, blaming President Obama. He said that he believed the shutdown was necessary to avoid an “American financial collapse 10 years from now”.[103]

[March 9, 2014]: In March 2014, he denounced the inclusion of a telecast by Edward Snowden at the South by Southwest conference in Austin, Texas, and asked that it be canceled, predicting that it would encourage “lawless behavior” among attendees.[86]”

Pompeo opposed the Affordable Care Act (ACA).[98] Pompeo has been criticized for saying that he supports funding for certain programs that are part of the ACA yet opposing them when they are a part of the ACA.[99]