Wikipedia: “In 2003, Whitaker founded Buy the Yard Concrete, based in Urbandale, Iowa, which did projects as far away as Las Vegas. In 2005, Whitaker was named as a defendant to a collections lawsuit in Nevada for $12,000 in unpaid invoices for supplies and equipment rentals related to a concrete project in Las Vegas. The lawsuit was settled out of court.[18]

On June 15, 2004, Whitaker was appointed U.S. Attorney for the Southern District of Iowa by President George W. Bush. The appointment was at the recommendation of Iowa Senator Chuck Grassley, in spite of Whitaker’s minimal relevant legal experience.[19]

From 2005 to 2007, Whitaker was responsible for the unsuccessful investigation and prosecution of Iowa State Sen. Matt McCoy on charges of attempting to extort $2,000.[20] A columnist for the Des Moines Register said that the case “… was based on the word of a man former associates depicted as a drug user, a deadbeat and an abuser of women; a man so shady even his Alcoholics Anonymous sponsors called him ‘a pathological liar.'”[21][22] The jury took less than two hours to return a verdict of “not guilty”.[23][24]

As U.S. Attorney, Whitaker sought unusually stringent sentences for individuals accused of drug crimes. One of the cases involved a non-violent drug offender who was given the option by Whitaker’s office of being prosecuted with the chance of spending the rest of her life in jail or accept a plea deal of 21 to 27 years in prison. Federal Judge Robert W. Pratt later said the prosecutors in the case had “misused” their authority and urged President Obama (who had then become president) to grant the non-violent drug offender clemency; President Obama commuted her sentence, after she had served 11 years in prison.[25]

Whitaker resigned in November 2009 following the Senate confirmation of his replacement, Nicholas A. Klinefeldt, who was nominated by President Obama.[14][26]”

During the 2012 presidential campaign, Whitaker was Minnesota governor Tim Pawlenty‘s co-chairman in Iowa, and then state co-chairman for Texas governor Rick Perry.[29]

Whitaker was a candidate for the Republican nomination in the 2014 United States Senate election in Iowa, a seat being vacated by Democrat Tom Harkin. He came in fourth in the Republican primary, with 11,909 votes (7.54%). The nomination was won by Joni Ernst, who went on to win the general election.[30]

After losing the Republican primary, Whitaker chaired the campaign of Sam Clovis, another unsuccessful primary candidate who had been selected to run for Iowa State Treasurer.[31] Clovis lost in the November 2014 general election.[32][33][34]

Whitaker’s unusual path to Justice Department included owning day-care center, trailer maker and concrete supplier The Washington Post By Shawn Boburg and Robert O’Harrow Jr. November 14, 2018 “Whitaker served as U.S. attorney until 2009. When he stepped down, he issued a news release that cited several cases as significant, including a prosecution of fraud at a state workforce-training agency, a child pornography investigation that led to charges against 13 people and a crackdown on the misuse of immigrant work visas.  Among the office’s biggest setbacks was the prosecution of Matt McCoy, an openly gay Democratic state senator and a rising political star on the left. A grand jury indictment accused McCoy of using his political position to extort $2,000 from a security firm in Des Moines where he was a consultant. The investigation took many months but ended with an acquittal in less than two hours, triggering scorching criticism of Whitaker in local media, including questions about whether McCoy was targeted because he was gay and a Democrat.”

Whitaker is Unfit to be Attorney General, Acting or Otherwise Beyond the unconstitutionality of his appointment, his views on judicial review and religious litmus tests should disqualify him. The American Conservative By BRUCE FEIN • November 19, 2018

Brief No. 18-496 in the Supreme Court of the US by Tom Goldstein & Tejinder Singh Barry Michaels, Petitioner, to find Acting AG appointment of Whitaker illegal and invalid on November 28, 2018 h/t NormEisen

March 3, 2015, FACT announced it would use FOIA and a request to the AG to retrieve Hillary Clinton State Department records to obtain the thousands of emails “concealed”.

“One thing to keep in mind, after Whitaker resigned as the AUSA for Southern District of Iowa, in 2009 thru (late) 2017, Whitaker was a managing partner of Whitaker Hagenow & Gustoff LLP (see firm’s current Facebook link , see a LinkedIn link), which is now Hagenow & Gustoff LLP. So that might explain why Matt Whitaker is linked to numerous business entities.

OP South, LLC  IA SOS-SCC NO; 426811, based on the State of Iowa filings, Whitaker incorporated this Company in November 2011.

In 2012 the Des Moines City Council Apprroved a (HUD backed) affordable housing project, the City Council awarded this contract to Matt Whitaker’s MEM Investments (see Iowa Secretary of State, State Corporation Commission below).  The current owner, MEM Investment, LLC (Matthew Whitaker, 521 East Locust Street, Suite 302, Des Moines, IA 50309-2017) has been unable to complete the project. If the rehabilitation is not completed by December 12, 2016, and a Certificate of Occupancy issued, the City will be required to repay the $164,989 to HUD because no affordable units were created with HOME funds. [Default letter April 1, 2016]

Whitaker NewsMaxAppearances 2015-2016: With a bit of sleuthing I stumbled across two NewsMax interviews where Matt Whitaker pontificates about Sec Clinton, her emails and in “his opinion” why Sec Clinton should be in jail.”

Whitaker will not recuse himself from Russia probe, despite ethics advice that he should LA Times By DEL QUENTIN WILBER December  20, 2018

As long as Matthew Whitaker is in place, the Russia investigation is in danger The Washington Post Editorial Board Acting attorney general Matthew G. Whitaker attends a meeting at the White House on Dec. 18. By Editorial Board December 28, 2018

So, I Got an Email From Matthew Whitaker’s Wife Slate In her message, Marci Whitaker says the Mueller investigation is “wrapping up” and that the government shutdown is affecting her family’s ability to earn a living. By MARK JOSEPH STERN January 17, 2019 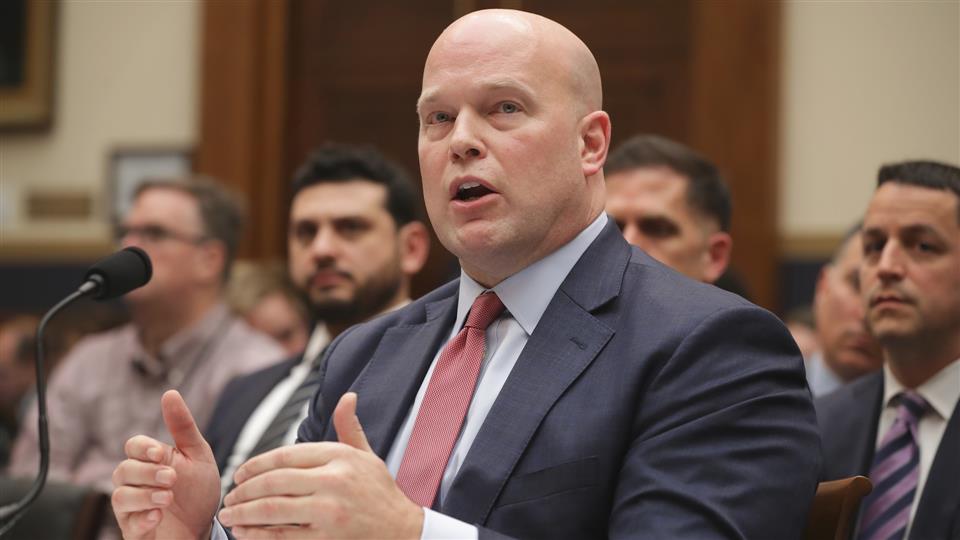 Whitaker Eyes Axing Asylum for Victims of Domestic Violence, Child Sex Abuse He plucked a case from obscurity to decide it himself, with potentially huge consequences for migrants.The Daily Beast by Justin Glawe February 1, 2019 “DALLAS—Acting Attorney General Matthew Whitaker is considering blocking one of the last avenues for victims of domestic violence, including children, to be granted asylum in the U.S.

In December, Whitaker quietly referred an internal Justice Department ruling on family-based asylum claims to himself. The decision hinges on what constitutes membership in a “particular social group” (PSG), a legal threshold to obtain asylum. Whitaker said in an order last month he would determine “whether and under what circumstances” being a member of a family qualifies as membership in a PSG. Immigration attorneys fear Whitaker will drastically narrow the definition and remove protections for victims of domestic and other intra-familial violence, including child victims of sexual assault and abuse.”

My Client Escaped Rape and Violence. Jeff Sessions Would Have Closed the Door on Her. The new DoJ standards are not just inhumane; they are a death sentence for many seeking asylum. The Daily Beast Aimee Deverall June 18, 2019

Last Friday, June 8, 2018, an Immigration Judge in Texas awarded asylum to my client. Attorney General Jeff Sessions announced his sweeping decision in Matter of A-B-, in which he makes the disturbing statement that “generally” asylum claims “pertaining to domestic violence” should no longer be approved. He injected his animus towards immigrants and women throughout the decision, mischaracterizing Ms. A-B-, the respondent in the case, as an economic migrant coming to work rather than someone who was fleeing for her life. Perhaps even more startling, Sessions then extended this flawed generalization about domestic violence claims to any case where the perpetrator is a private, non-governmental actor. This has broad implications for victims of gang and LGBTQ violence as well as people fleeing genocide by other ethnic groups. Sessions’ ruling directs adjudicators nationwide to prejudge and reject claims like these, regardless of the individual merits.