“A 2009 study from the Justice in Mexicoorganization found that 93.6 percent of municipal police in Mexico depend on corruption to make a living wage.” Rolling Stone

Mexico, Agreements and other truths, thread by @saysDana “Truth #1 – Trump desperately wants a deal with MEXICO while Enrique Peña Nieto is still in office – Truth #2 – This is simply a deal with Mexico. NAFTA includes Canada. Let’s keep that one straight. Only Trump would deliver a “preliminary” message about NAFTA so that every sad MSM channel pivots from talking about John McCain. There is more to the NAFTA story it’s deeper.”

“On Friday [July 13], Secretary of State Michael R. Pompeo will lead the team to Mexico City for meetings with President-elect Andres Manuel Lopez Obrador, a feisty leftist populist who won a landslide victory on July 1, as well as his outgoing predecessor Enrique Peña Nieto, and other senior government officials. Pompeo will be accompanied by President Trump’s son-in-law and senior advisor, Jared Kushner, who is nominally in charge of the Mexico portfolio. Homeland Security Secretary Kirstjen Nielsen, a hard-liner on immigration, and Treasury Secretary Steven T. Mnuchin, whose office handles economic sanctions, also are on board. Trump reportedly has dubbed Lopez Obrador “Juan Trump.” Trump reportedly has dubbed Lopez Obrador “Juan Trump.” Lopez Obrador wants to alleviate poverty, expand employment and take the military out of the fight against drug trafficking. On Wednesday, he said he would cancel a scheduled $1.3-billion purchase of eight American helicopters for the Mexican navy. He also wants negotiations completed on the North American Free Trade Agreement, which seems to be a fast-fading priority at the White House. What sustained the Washington-Mexico City relationship under Trump, despite the tensions, was a back channel that Kushner created with the powerful foreign minister of Mexico, Luis Videgaray. He is on the meeting schedule Friday. Lopez Obrador was voted into office by a population fed up with official corruption and skyrocketing homicide rates.”

“We have to keep in mind how Mexico works. Mexico is run by the wealthy. People aren’t all living well. Many in poverty. Crime. Thus, they want out. There’s a reason for that.” Please review it all.

“It’s no different than what’s been happening in the U.S. It’s about a wealthy few, wanting everything and working in tandem with others just like them. With help from a few corrupt politicians and business people. Let’s take a look at the Mexican connection (to the mob and the world) If you think it isn’t happening, you would be wrong. Mexico is always key to grifts and corruption. Why send so many to visit this new President? Trump bashes Mexico daily. Might be worth looking into the ties that bind Mexico to the President and the mafia families surrounding that. Take a look at all the characters. BILLIONAIRES in Mexico always get elected. They control everything: drug routes, food, equipment, immigration approvals, cartels, business streams of fast money. They control it all. Less than 10 families…. [Here’s a list of the wealthiest Mexicans]

Why do you think Mulvany relaxed the CFSB rules? Put himself in charge to reduce regs for payday CASH lenders. It’s the start of the deal………..You give me something I give you something back.

“You just have to see how they coordinate. Mexican MOB/ US MOB / RU MOB They all need each other.  Before he was elected, Trump accused [Carlos] Slim of using his ownership stake in the Times to influence the paper’s coverage of him. The Times said Slim never affected coverage and a representative for the billionaire said Slim wasn’t interested in influencing the election. Uh huh, sure. Back in 2009, where was the outrage when Carlos Slim, the wealthiest Mexican in Mexico buys into the Times to help pay down debt. The players who went ahead to “negotiate” a deal. Why send a Treasury guy to a trade meeting? The answer in an article was that he [Mnuchin] handles economic sanctions. That’s just the public statement. But you see, the circle always comes together. Obrador has known many of the players in today’s Russian / laundering saga. López Obrador hired former New York City mayor Rudy Giuliani to craft a zero-tolerance policy that would help reduce escalating crime in Mexico City. I had to pull this information from the archives. I’ll post the link so you can read it. so IMO – Rudy being mayor on 9/11 shot him to stardom. Giuliani Partners began making big bucks. Crime fighting skills were huge. People paid huge $$$$$ for his “expertise”. Mexico too. The Republican Party has its future riding on him. Not in 2004, of course— but definitely in 2008, by which time the party will have to expand its base well beyond the Christian Right.” https://web.archive.org/web/20080503183843/http://www.thebrooklynrail.org/express/june03/vivarudy.html … 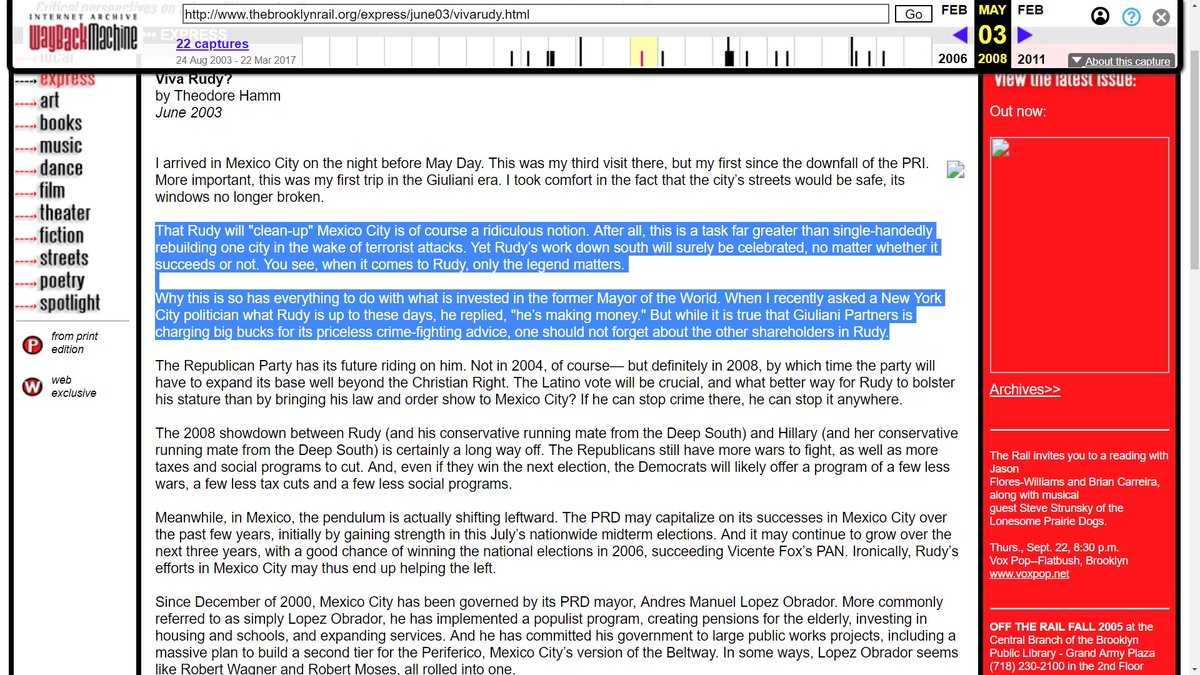 “Bear with me on this idea: It’s IMO. Lopez says: Lopez Obrador has announced plans to shake up the strategy in the nation’s battle against drug traffickers by suggesting a negotiated peace and amnesty for some of the very people currently targeted by security forces. Peace? What do you mean Peace? We’ve never had peace in Mexico and those helicopters would be put to good use, right? If you have peace, you get no orders. No orders you get no sales. No sales you have to find another way to increase sales. Who wants Peace? The U.S. doesn’t want Peace. If they have peace, what do they need a border patrol for? What do they need equipment for? What do they need a wall for? Why would they need to have increased presence at the border? Why would they need to work harder on drug cartels? This is the other message they are pushing: Decriminalize MaryJane and regulate Opium? His pick for the interior ministry, Olga Sanchez, has said the new government will look into decriminalizing marijuana and regulating opium for pharmaceutical use. It that happened, how much revenue would be lost to Mexico and the U.S.?”

“In the THREAD I mention above, I was concerned about what AMLO (as I’ll refer to him) being a bad choice for some many reasons. But that Mexico is like the Southern Mafia. Run by Oligarchs and who have their fingers in drugs and businesses around the world and in the U.S. I suggested that AMLO was making waves and making comments that got the attention of the U.S. like Pompeo and Kushner. I mean, they sent a delegation to Mexico pretty quickly because of his statements. [about canceling the Lockheed Martin helicopter order prompting the Pompeo/Kushner/Neilson/Mnuchin visit on July 13, 2018] See this point. It’s really important as it relates to how the mob helps each other. That’s what Giuliani is. Obrador has known him. Obrador was being groomed. Years before, Rudy Giuliani helped Mexico with talks on how to handle crime. Obrador hired him.”  @saysDana

Legal Pot In Mexico: Everything You Need to Know Rolling Stone This summer, Mexico became one of a few countries to nationally legalize medical marijuana – but where will it go from here? By MICHELLE JANIKIAN “On June 19th, 2017, Mexico legalized medical marijuana, or more specifically, “pharmacological derivatives of cannabis” to be regulated and studied by the Ministry of Health. “

“If Mexico meets its deadline, products derived from cannabis could be available in Mexican pharmacies in early 2018 to help treat diseases like epilepsy, Parkinson’s, and cancer. Is full legalization in Mexico possible? The momentum to legalize cannabis in Mexico is there, and no one has been more outspoken about this than former President Vicente Fox Quesada.  In the past, Fox believed Mexico could fully legalize marijuana by 2018, but in a recent interview, he admitted Mexico’s upcoming presidential election, scheduled for July 1st, 2018, could stall any progress on this front. Fox, has been meeting folks in the U.S. for a long time. I mean he really wants this to happen, because he can probably make money on it. Why not?”

By Paulina Villegas and Kirk Semple July 1, 2018  Abel Montúfar was among at least 136 politicians across Mexico who have been assassinated since last fall. More than a third were candidates or potential candidates.  “If the Mexican state is not able to guarantee that the will of the people is respected, then you don’t have democracy,” said Antonio Orozco Guadarrama, secretary-general of the leftist Revolutionary Democratic Party in Guerrero. “This puts our entire democracy in great danger.”