“Born in Ukraine in 1957, Blavatnik spent most of his childhood in a provincial Russian town. In his teens he studied at the Moscow Institute of Transport Engineers. The family immigrated to the U.S. when he was 21, settling in Brooklyn. He earned a master’s in computer science at Columbia University and worked in the IT department at Macy’s and at the Arthur Andersen accounting firm. He became a citizen in 1984. A couple of years later, he started Access Industries, and three years after that, he got an MBA from Harvard.

After earning his degree, he teamed up with an old classmate from the Moscow Institute: Viktor Vekselberg. The New York Times reported in May that agents for Mueller had detained Vekselberg, 61, when he arrived in New York earlier this year. Vekselberg attended Trump’s inauguration and the Times reported that Mueller’s interest in him “suggests that the special counsel has intensified his focus on potential connections between Russian oligarchs and the Trump campaign and inaugural committee.” Vekselberg was present at a 2015 dinner in Russia at which Trump’s former national security adviser, Michael Flynn, was seated beside Putin. (Flynn has pleaded guilty to lying to federal investigators about his contacts with the Russian ambassador during the transition.)

In April, Vekselberg was among seven oligarchs sanctioned by the U.S. Treasury Department, which cited Russia’s “malign activity around the globe.” His name arose again in May when lawyer Michael Avenatti alleged that a U.S. company controlled by Vekselberg and his cousin had put $500,000 into the same account that Trump associate Michael Cohen used to pay hush money to Stormy Daniels. An attorney for the company said at the time that it is controlled by Americans and that it had retained Cohen “regarding potential sources of capital and potential investments in real estate and other ventures.”

Unlike Blavatnik, Vekselberg is considered to have maintained close ties to the Kremlin. For a time he and Blavatnik seemed to be working in tandem to establish themselves in influential Washington circles. As reported in a 2014 New Yorker profile, in 2004 Vekselberg bought nine jewel-encrusted Faberge eggs from the Forbes family for more than $100 million and gifted them to Russia, which was viewed as a way to curry favor with Putin. In 2006, the Kennan Institute — a division of the Woodrow Wilson International Center for Scholars, where Blavatnik was a donor and official fundraiser — gave Vekselberg the Woodrow Wilson Award for Corporate Citizenship. After some pushback, the award was rescinded, according to The New Yorker. But the following year, the institute gave Vekselberg a public-service award. The same year, Blavatnik’s Access donated $50,000.”

How Putin’s oligarchs funneled millions into GOP campaigns Dallas News MAY 8, 2018 Written by Ruth May

Viktor Vekselberg is one of the 10 richest men in Russia. He and long-time business partner Blavatnik hold a 20.5 percent stake in Rusal. (They met while attending university in Russia.)

In 1990, Blavatnik and Vekselberg co-founded the Renova Group for large-scale investments in energy, infrastructure, aluminum and other metals. One of their earliest investments was in Tyumen Oil Co. (TNK), founded in 1995. TNK is best known for its contentious partnership with British Petroleum after the two entities formed a joint venture in 2003. That rocky relationship ended 10 years later when they sold out to the state-controlled energy giant, Rosneft, under pressure from the Russian government.

As for BP, that pressure took the form of growing harassment and intimidation from Russian authorities who at one point, according to Forbes, refused to renew visas for BP employees, forcing BP’s joint venture chief Robert Dudley (who is now chief executive of BP) to flee Russia and manage TNK-BP from a foreign outpost in a secret location.

Vekselberg has connections to at least two Americans who made significant GOP campaign contributions during the last cycle. They are among several Americans who also merit Mueller’s scrutiny. 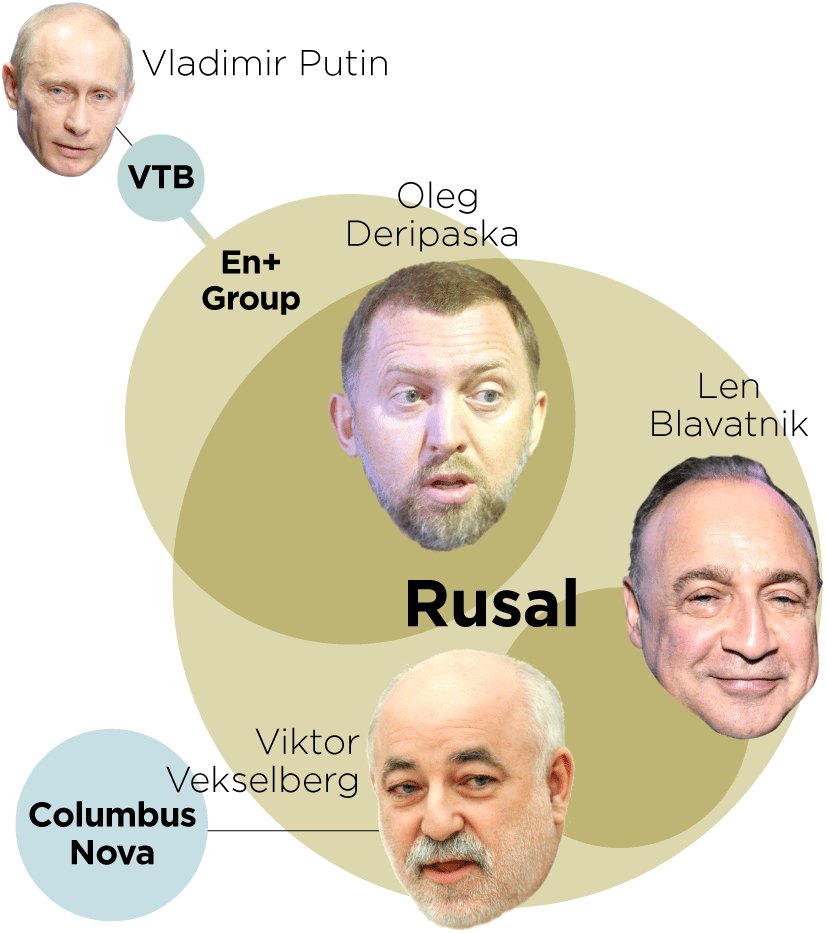 Intrater had no significant history of political contributions prior to the 2016 elections. But in January 2017 he contributed $250,000 to Trump’s Inaugural Committee. His six-figure gift bought him special access to a dinner billed as “an intimate policy discussion with select cabinet appointees,” according to a brochure obtained by the Center for Public Integrity.

Alexander Shustorovich, chief executive of IMG Artists, attempted to give the Republican Party $250,000 in 2000 to support the George W. Bush presidential campaign, but his money was rejected because of his ties to the Russian government, according to Quartz. So why didn’t the Trump team reject Shustorovich’s $1 million check to Trump’s Inaugural Committee?

Simon Kukes is an oil magnate who has something in common with Intrater. From 1998 to 2003, he worked for Vekselberg and Blavatnik as chief executive of TNK. Redacted CIA documents released in 2003 under the Freedom of Information Act said “TNK president Kukes said that he bribed local officials.” The CIA confirmed the authenticity of the reports to The Guardian newspaper but would not comment further. In 2016, Kukes contributed a total of $283,000, much of it to the Trump Victory Fund. He had no significant donor history before last year’s election. 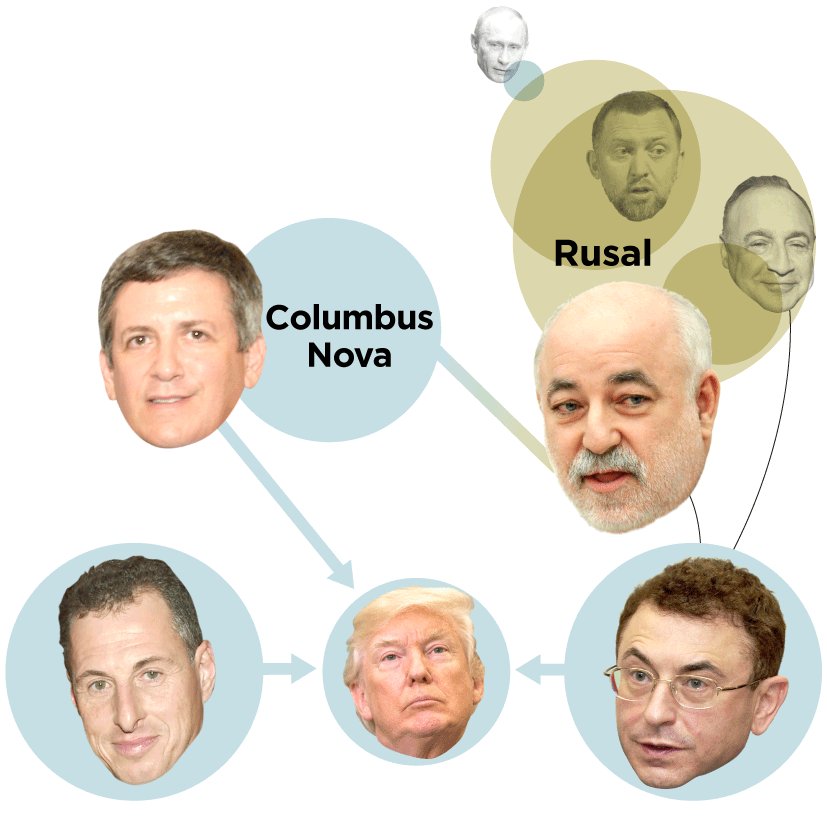 There is no doubt that Kukes has close ties to the Putin government. When he left his job as CEO of TNK in June 2003, he joined the board of Yukos Oil, which at the time was the largest oil company in Russia owned by the richest man in Russia, Mikhail Khodorkovsky. Four months after Kukes joined the board, authorities arrested Khodorkovsky at gunpoint on his private plane in Siberia on trumped up charges of tax evasion and tapped Kukes to be CEO. This decision could only have been made at the highest levels in the Kremlin. The arrest of Khodorkovsky rattled the nerves of international investors and was the first tangible sign that Putin was not going to be the kind of leader that global executives and Western governments had expected him to be when he first took office in 2000.

Khodorkovksy was given a 13-year sentence in a Siberian prison and served 10 years before being released by Putin in December 2013, a month before the start of the 2014 winter Olympics in Sochi, as a sign of goodwill. As for the fate of Khodorkovksy’s company, its largest oil subsidiary was sold in a sealed bid auction to Baikal Financial Group, a shell company with an unpublished list of officers. Baikal was registered at an address that turned out to be a mobile phone store in Tver, Russia. Three days after the auction, all of Baikal’s assets were acquired for an undisclosed sum by Rosneft, the Russian oil giant that went on to buy TNK-BP in 2013.

In total, Blavatnik, Intrater, Shustorovich and Kukes made $10.4 million in political contributions from the start of the 2015-16 election cycle through September 2017, and 99 percent of their contributions went to Republicans. With the exception of Shustorovich, the common denominator that connects the men is their association with Vekselberg. Experts who follow the activities of Russian oligarchs told ABC News that they believe the contributions from Blavatnik, Intrater and Kukes warrant intense scrutiny because they have worked closely with Vekselberg.

Even if the donations by the four men associated with Russia ultimately pass muster with Mueller, one still has to wonder: Why did GOP PACs and other Trump-controlled funds take their money? Why didn’t the PACs say, “Thanks, but no thanks,” like the Republicans said to Shustorovich in 2000? Yes, it was legal to accept their donations, but it was incredibly poor judgment.

McConnell surely knew as a participant in high level intelligence briefings in 2016 that our electoral process was under attack by the Russians. Two weeks after the Department of Homeland Security and the Office of the Director of National Intelligence issued a joint statement in October 2016 that the Russian government had directed the effort to interfere in our electoral process, McConnell’s PAC accepted a $1 million donation from Blavatnik’s AI-Altep Holdings. The PAC took another $1 million from Blavatnik’s AI-Altep Holdings on March 30, 2017, just 10 days after former FBI Director James Comey publicly testified before the House Intelligence Committee about Russia’s interference in the election.

And consider Steve Mnuchin, Trump’s campaign finance chairman. Could he have known that the Trump Victory Fund, jointly managed by the Republican National Committe and Trump’s campaign, took contributions from Intrater and Kukes? Mnuchin owned Hollywood financing company RatPac-Dune with Blavatnik until he sold his stake to accept Trump’s appointment as the Treasury secretary.

Which PAC officials are making the decisions to accept these donations?